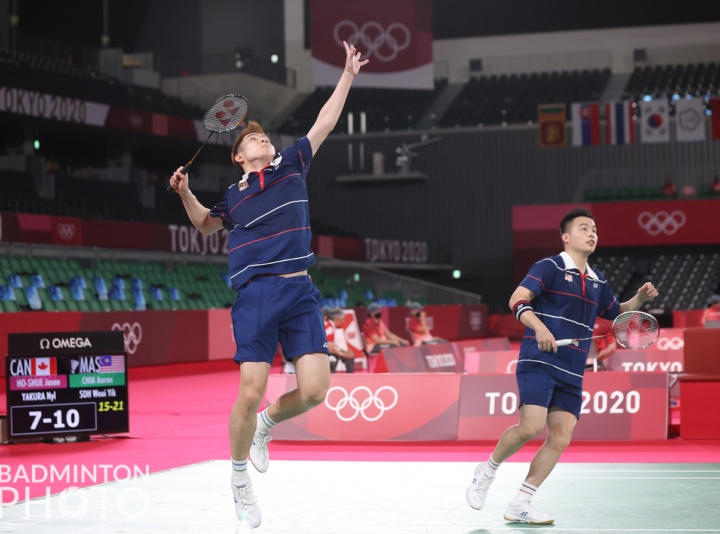 FRIDAY 30 JULY 2021
TEXT BY BAM STAFF
National doubles duo, Aaron Chia and Soh Wooi Yik, have shifted their attention to their impending battle against Indonesia’s Mohamad Ahsan-Hendra Setiawan, the second seeds, for the bronze medal in the men’s doubles event.

Aaron-Wooi Yik, competing in their first Olympics, are now aiming to wrest the bronze after going down fighting to China’s Li Junhui-Liu Yuchen in the semi-finals tonight. The Malaysians were in brilliant form and challenged the third seeds all the way, forcing the first set to the deuce before losing 24-22.

They kept up the pressure on the former world champions, trying everything they could to win the second set, however the experienced Chinese pair managed to stay ahead and won 21-13 to qualify for the final.

“After the first set, we felt some pressure and our confidence took a slight dip, but we pushed ourselves to find a way back and regain our rhythm. It was a pity we did not take the first set, otherwise it would have been a different story,” said Aaron.

The final hopes over, Aaron-Wooi Yik have to focus on the bronze playoff. It will be the second time in the tournament they will face Ahsan-Hendra, who had lost their semifinal encounter to Chinese Taipei’s Lee Yang-Wang Chi-lin.

Both pairs were drawn in Group D with the Indonesians emerging the winners after beating Aaron-Wooi Yik. It will be a chance for Aaron-Wooi Yik, who had stunned world No.1 Kevin Sanjaya-Marcus Gideon in the quarterfinals, to exact revenge and go on to claim the bronze.