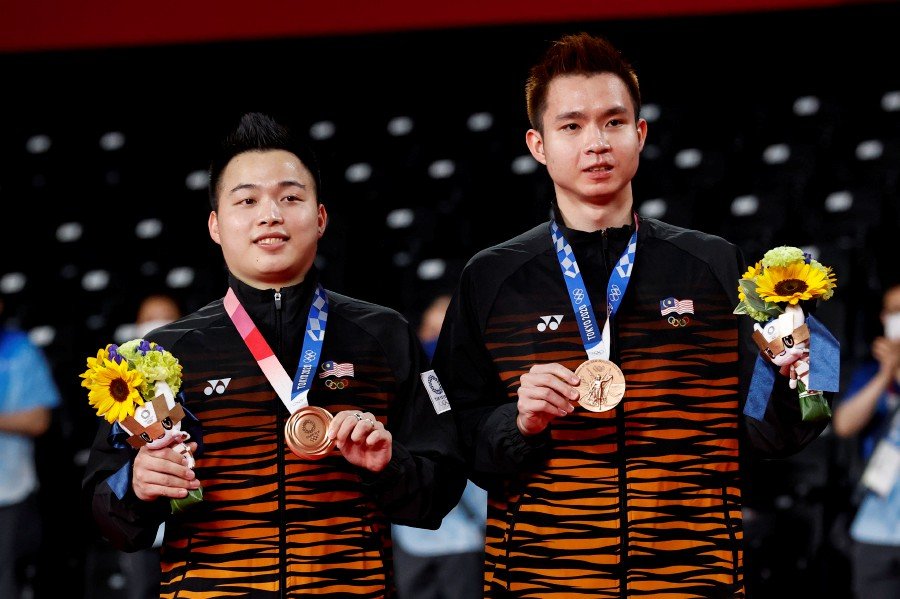 Malaysia’s Aaron Chia and Soh Wooi Yik delivered the country’s first medal of the Tokyo Olympics when the duo emerged victorious in the playoff for the bronze medal tonight. Aaron-Soh produced a solid performance against Mohamad Ahsan-Hendra Setiawan, ranked No. 2 in the world, to snatch the bronze medal.

In tonight’s playoff which was watched by millions of Malaysians, Aaron-Wooi Yik did not get the best of starts and lost the first set 17-21 in 17 minutes. But the younger Malaysians, ranked no. 9 in the world, quickly recovered to take charge and level the tie, winning 21-17. Their confidence boosted, Aaron-Wooi Yik controlled the game and steadily reeled in the points to win 21-14 and secure the precious bronze in their Olympics debut.

It has been a remarkable run here for Aaron-Wooi Yik considering they went down to Ahsan-Hendra in straight sets during a group stage encounter. To top it off, these boys had stunned the competition’s favourites and world No. 1 pair of Kevin Sanjaya-Marcus Fernaldi Gideon, in the quarterfinals

For Aaron and Wooi Yik the disappointment of missing out on advancing to the final ended with a massive roar as the fell to the ground in delight. It was a somewhat satisfying conclusion to their campaign in the Olympics.

“I was absolutely thrilled because we managed to overcome the pressure and we never gave up. This is the best moment of my career after making some mistakes previously. But this is not over, we will continue fighting,” said an emotional Wooi Yik after the game.

“I felt that in the second set, they (Ahsan-Hendra) were still capable of handling the pressure. The thoughts of my family inspired me to keep on fighting and not give up on court and to remain strong,” said an overjoyed Aaron.

“We are satisfied but it’s not 100 percent because we made mistakes but we’re happy we improved during the tournament,” Aaron said.

Both players expressed their thanks and appreciation to all Malaysians. “We want to thank the Malaysian fans, our families and friends who have supported us. We also want to thank BAM and the support staff who have helped us all this while.”